Featuring a near complete overhaul of its content management user interface, expanded player functionality and direct integration to Navori’s homegrown Aquaji marketing analytics software among other new developments, the new release brings a more responsive user interface, exciting features, and appealing functionality to digital signage users across all business verticals. The QL 2.7 design also enables an on-premise version of the company’s lightweight QL Express solution, previously available in the cloud only, for the first time – opening the world of Navori Labs software to any digital signage user across all budgets.

The QL 2.7 software release continues Navori’s ongoing mission of improving the user experience across all digital signage business verticals without limiting software feature innovation. This is immediately made clear through a completely redesigned user interface for QL Content Manager, which supports an expanded range of content types while making it easier for users to navigate content creation, scheduling, and other management tasks.

The software integrates new tools to filter live data based on user-created rules. In the case of Power BI, a user could create rules for QL templates that ensure only the desired data from large data sets are presented on digital signage displays.

“Our goal was to amplify the visualization and accessibility of media that our customers manage in the interface, and appeal to a more expansive community of digital signage users,” said Jeffrey Weitzman, Managing Director, Navori Labs. “Like any professional software platform, continuous modernization is necessary to evolve with and grow your customer base. The content library is now fully modernized with native PowerPoint and PDF file uploading, and we have added a series of new buttons that visualize the content management process, accelerate playlist creation, and just overall makes QL faster and easier to use as a communication vehicle.”

The new software release also fully integrates QL digital signage software with Aquaji, the marketing analytics software introduced to retail and physical businesses in 2021. The direct integration offers many business benefits for users, including the automatic personalization of digital signage content in real-time based on the profile of the live audience.

“Navori Labs is the only true CMS supplier that also creates, rights and owns its own computer vision analytics platform,” said Weitzman. “QL 2.7 introduces the formal link between the two products. In addition to receiving real-tie data feeds from Aquaji to QL Player, users can now create logic statements inside the UI and tell the content when it should play. By applying that logic and preloading media, Aquaji makes in-the-moment decisions and directs QL serve to appropriate media to the appropriate person. The integrated solution is effectively curating the playlist, which is a far more elegant approach than abruptly changing content manually on the fly.”

The Aquaji experience is also now well-entrenched in QL’s user interface. Users can now pull Aquaji-related data and reports directly from the UI that provide specific and detailed information on content playback. The analytics will include what media played for how long and on what screens, for example. “If the media was part of a QL template, users can even analyze what zone ads played in, the size of the zone, and all other details relevant to the event,” added Weitzman. “These are the exact business benefits that customers should expect from enterprise-level content management software.”

Navori Labs has both rewritten and expanded the functionality of its QL Player software to improve performance on existing QL-supported media player platforms, and enable QL Player on new platforms. A latter example is the immediate availability of QL Player software for Innes PlugNCast media players. This new development from Navori Labs, which acquired the Innes PlugNCast business last year, allows PlugNCast to remotely update their players and seamlessly migrate their content libraries to QL.

“Our acquisition adds more than 25,000 live endpoints to QL-powered digital signage networks,” said Jerome Moeri, CEO, Navori Labs. “By adding QL Player functionality to PlugNCast media players, we can streamline the process of moving these users from a legacy system to a more modern software environment.”

One interesting new cost-cutting feature on the playout side is the introduction of HDMI passthrough to BrightSign and Innes PlugNCast media players. This is especially useful for QL users that play broadcast content over their signage networks. Direct HDMI passthrough effectively eliminates the encode and decode stage and need to transport content over IP, which means no external processing and networking equipment is required.

Developers will be especially happy with QL 2.7, as the QL Server API adds several new QL functionalities that were not previously available programmatically. “QL is a very robust platform with more than 850 features available,” said Moeri. “We now have updated API documentation for a much larger volume of these features. Third-party developers used to working with a restful API stack with the ability can now freely develop their own amazing features. We believe offering this open and robust architecture with high-quality documentation will open a lot of doors for developers to add value to their own networks.”

Navori Labs will demonstrate these and other new QL 2.7 features at ISE and InfoComm on QL Professional and QL Essential. The former represents Navori’s enterprise-level solution for large-scale networks, and like QL Express is available in cloud and on-premise versions.

Navori Labs is an enterprise committed to providing the most reliable, interoperable and user-friendly software application available in the industry. An exclusive leader in the global digital signage industry with nearly 25 years of experience, Navori has built a reputation as an industry innovator strengthened by a skilled engineering team, and continued investment in research and development initiatives. Navori has also continued to invest in global growth, with local and regional resources available worldwide. Navori’s flagship QL digital signage engine is built with everyone in mind and has been standardized for use in many of the largest digital signage networks around the world. The company’s engineering approach balances efficient design and operation with exceptional performance to satisfy integrators and end-users expectations. Visit www.navori.com for more information. 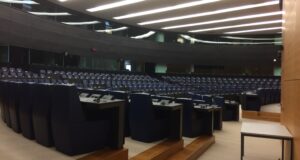