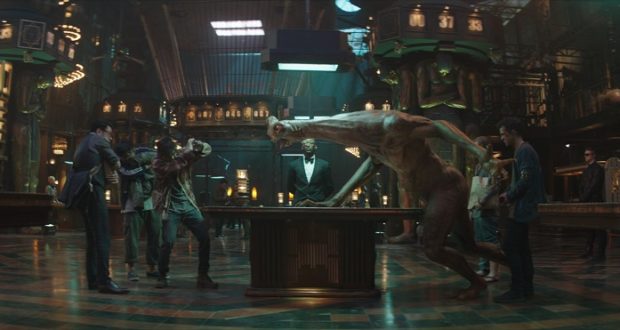 Adelaide, South Australia— In a project spanning six months, Rising Sun Pictures produced 86 visual effects shots for Animal World, the new fantasy adventure film that debuted to considerable fanfare at this year’s Shanghai International Film Festival and is currently in international release. The work drew on the full gamut of the studio’s core strengths and included everything from a card-playing creature to a loopy dream sequence, a mind-blowing car chase and a moody hero shot of “Destiny,” the hulking freighter-turned-floating-casino that serves as the film’s primary location.

“BangBang and I have a long history with Rising Sun Pictures and their work is second to none,” said Dietz. “Yan Han was particularly attracted to RSP’s incredible work on X-Men: Days of Future Past and wanted to bring that talent into key sequences in Animal World. RSP again delivered exceptional work. We are thrilled with the result.”

Despite language differences and the geographic distance separating RSP and the production in China, the collaboration worked exceptionally well. “Filmmaking has become a global business,” says RSP Executive Producer Gill Howe. “We’re used to working over long distances and across cultures. We communicated with the production team in China via cineSync and Skype, just as we do with US and UK-based productions. This ensured the team could create amazing visuals that would be in line with the filmmaker’s vision.”

One of the film’s most exciting sequences is an elaborate car chase where Kaiji, driving a BMW coupe, is pursued by ninjas on motorcycles through a crowded city. RSP created a central part of the sequence where the pursuit enters a tunnel and things literally spin out of control. “There’s a lot happening in the tunnel…speeding cars, collisions, gunfire, explosions…and our job was to make it look as fast and dangerous as possible,” recalls RSP Visual Effects Supervisor Malte Sarnes. “Most of it was far too dangerous to shoot practically, so the motorbikes, the hero car and other vehicles had to be done in CG.”

The studio’s 3D team produced CG models of the BMW, the motorcycles and various other vehicles, including a truck that collides with one of the bikes, causing it to explode in flames. All the vehicles had to be made photo-real down to the tiniest detail so that practical and CG elements could be used interchangeably. “The hero vehicle was challenging because it had been previously damaged and suffers additional dents and scrapes as the scene progresses,” says CG Supervisor Ryan Kirby. “The rigging and shading was also quite involved, because the cars are all metal and have headlights, taillights and rubber tires.”

The studio’s 2D team assembled the scene into its final form, placing CG vehicles into the background environment and adding actors and stunt talent who had been shot separately on green screen (including a ninja who crashes through the windshield of the BMW). Each bit of action was choreographed to the millisecond. Pyrotechnics and other environmental flourishes supplied the finishing touch. “John Dietz told us to make it big, so wherever we could add a little something extra…sparks, smoke, explosions, we went for it,” notes 2D Lead Jess Burnheim.

Many of the film’s visuals have a hallucinatory quality. In RSP’s longest sequence (occupying more than 90 seconds of screen time), a dejected Kaisi wanders through a door of the casino and suddenly finds himself tumbling in space. He falls through the clutches of a claw-like patch of clouds before landing in an ocean where he is attacked by giant sharks. He is only saved from the jaws of the fish when the ocean magically freezes over.

Except for Kaisi, everything in the scene is CG. “Yan Han wanted it to feel trippy and creepy at the same time,” says Sarnes. “We went through many iterations with him and John Dietz. It was hard to get the tone just right, because it’s so subjective. It was the most challenging, and the most enjoyable, scene in the film.”

Choreographing the scene was demanding both artistically and technically, adds Kirby. “A single camera move is sustained for the full 90 seconds as Kaisi passes through four crazy environments,” he explains. “We go from a corridor into space, into water, into a frozen droplet and back to the corridor. It was challenging in terms of physical space and the changing scale.”

Nearly as complex, is a sequence involving an exterior view of the Destiny that appears at the opening of the film. Both the ship and the surrounding ocean environment are CG creations. “The ship appears to be a chemical tanker that was transformed into a casino,” says Sarnes. “There is a lot of secret military stuff happening on deck while the gambling goes on below.”

Artists spent months honing the details of the ship, the sky and the ocean. Burnheim notes that the length and prominence of the sequence made it essential to get the details right. “The audience has a lot of time to scrutinise the work and if something looks false, they’ll notice,” he says. “So, we used everything in our bag of tricks, adding flares and lights, wisps of smoke in the background, to give it an increased sense of realism.”

RSP’s character animators got to flex their creative muscles with a sequence involving a creature called Hightower. Elsewhere in the film, the tall, reptilian creatures are portrayed as vicious warriors, but here they sit in the casino relaxing over a game of cards. “We had to modify the creature for our sequence to give it hands,” explains Kirby. “That required high-definition muscle simulation. We needed to make sure that the body performance was up to scratch because we had them so close to camera. They also had to act a bit more, and even be a bit silly.”

Sarnes says the sequence ranks among RSP’s best character work. “When you see it on the big screen, you can appreciate the time and attention the artists invested in the characters,” he observes.

In all, RSP contributed to seven key sequences in the film. Collectively, that amounted to nearly nine minutes of material that was either fully or nearly fully CG. Howe says that the scope and variety of the work made it a gratifying project for the whole team. “We got to do creature animation, create far out digital environments and produce interesting effects,” she says. “It touched all the areas we excel at and so it was great opportunity for the company to show what we can do.”

At Rising Sun Pictures (RSP) we create inspirational visual effects for major studios worldwide. Creating outstanding images is at the core of our existence. At the heart of our talented team, there is a diverse knowledge and skill-set, enabling a collaborative core where we can work together to solve problems and deliver great visuals to our clients. We have achieved some truly amazing visual effects work by providing innovative solutions to technically challenging work. We have the capacity and talent pool to scale to suit the needs of our clients. RSP has worked on over 100 films including Tomb Raider, Peter Rabbit, Thor: Ragnarok, Logan, X-Men Harry Potter and Hunger Games franchises, Game of Thrones.