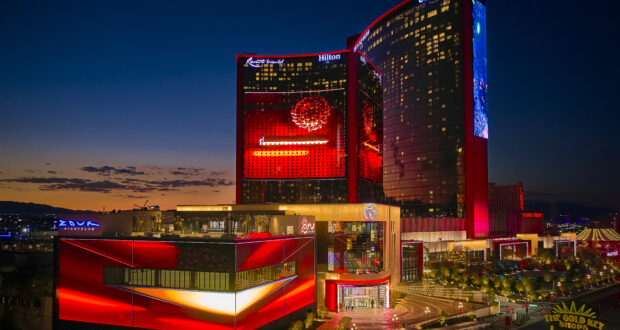 Santa Barbara, Calif. (September 22, 2021) — Resorts World Las Vegas is more than just the first ground-up resort to be built on the Las Vegas Strip in over a decade – it marks the beginning of a new era for a constantly evolving city. The near 88-acre property sits on the grounds of the former Stardust Resort and Casino, boasting 3,506 guest rooms and suites in three distinct hotels, over 40 world-class food and beverage outlets, a 5,000-capacity theatre, a two-story dining and retail promenade and state-of-the-art connectivity with an AV-over-IP system featuring Visionary-powered networked audio and video.

“Resorts World Las Vegas has built what is probably the largest AV-over-IP network of its kind,” reports Scott Freshman, chief operating officer for Visionary. “It encompasses almost every portion of the property, with more than 2,000 end points and growing. The size and scope of the project brought together multiple AV integrators, each of whom took on specific areas of the massive venture. It’s unique to have this many integrators who were once competitors coming together to put this wonderful project together.”

Technology West Group of Las Vegas was selected to oversee the project, including designing and implementing the overall AV system and property-wide network specifications. Richard Reisig, vice president for Technology West Group, worked directly with Resorts World Las Vegas to facilitate the design of the low-rise section (known as “the podium”), the west tower, The District and all outdoor areas. “A critical component in a network AV system in the network. The network at Resorts World Las Vegas includes over 2,000 PacketAV endpoints and 2,000 QLAN channels,” said Reisig. “The number of endpoints continues to grow as we build out the system. It’s a very large, purpose-built network designed to supply one gigabit of non-blocking bandwidth, end to end, to any location on the property with less than a millisecond of latency.”

“Technology West Group was chosen for the design phase and, at the time, the project was very fluid,” noted Reisig. “The final piece in the design was selecting a video solution. We chose a network-based video solution because Resorts World Las Vegas wanted to connect anything on the property to any location. Ultimately, we selected Visionary because they provided us with a reliable solution that filled each of the gaps. A key reason we selected Visionary was because of their robust network capabilities.”

Unique to Visionary, the PacketAV endpoints offer internal device VLAN tagging. Due to the complexity of the network and the different protocols, including video, QLAN, Dante, AES67, DMX and control, it becomes critical to segregate the traffic for effective network management. Reisig added, “With the size and complexity of the network, VLAN tagging was critical for us. Especially at the scale that we’re hitting, you can’t have 2,000 devices on a single VLAN network and just hope it works.”

In another significant milestone for the project, Visionary rose to the occasion to create an innovative Bluetooth-enabled wall plate encoder implemented throughout the system. Reisig explains, “Visionary had an HDMI wall plate encoder with VLAN tagging. We reached out to Visionary and said, ‘that’s great, but we don’t need analog audio; instead, we need Bluetooth.’ Visionary was very collaborative – they jumped in and offered to make us a custom wall plate that incorporated Bluetooth audio. Their flexibility changed the game for us. It enabled us to reduce port counts, switches, power consumption and overall costs by integrating two distinct products into one.”

The new $4.3 billion property was developed to bring an elevated experience to the modern Las Vegas traveler seeking luxury, value and variety. To provide unparalleled connectivity, Resorts World Las Vegas was designed as one of the largest AV integrations on the Strip. Resorts World Las Vegas can transmit a signal from anywhere on the premises and distribute it to the 100,000-square-foot LED screen (recognized as one of the largest LED building displays in the United States), the theatre, the casino or anywhere else on the property, and vice-versa. All this making the guest experience at Resorts World Las Vegas the most technologically advanced offered anywhere.

Each guest room in the resort’s three hotel brands — Las Vegas Hilton, Conrad Las Vegas and Crockfords Las Vegas — features an intuitive AV system designed by One Touch Living. “The scope of the project was to design the technology in the rooms to enhance the guest experience,” said Corey Brushia, president of One Touch Living. “Our goal was to create an environment that enables guests to interact with the rooms and the property. Visionary eliminated the need for a conventional HDBaseT matrix. Visionary allowed us to network from anywhere to anywhere. For example, we can take content from an executive suite, connect it with a meeting room or ballroom, or stream a special event into a villa. The possibilities are endless.”

National Technology Associates, a Las Vegas-based technology integrator, was selected for the integration in the resort’s first-floor common areas — including the hotel lobbies, registration, casino and gaming areas and underground levels. Shane Snell, project manager for National Technology Associates, said, “One of the largest challenges of this project was the scale. The property has nearly 2,000 video end points and thousands of loudspeaker channels. I’m not sure it’s possible to distribute those components in any way other than networking. Every system can now reach each other because the audio and video integration are on the same network. We’ve standardized Visionary and QSC to streamline the communication between the technology components.”

Resorts World Las Vegas features a state-of-the-art, 5,000-capacity immersive theatre. Global music stars Celine Dion, Carrie Underwood, Katy Perry and Luke Bryan will become the founding headliners for the venue. Scéno Plus, a Montreal-based theatre design firm, was enlisted to create the design, and Solotech was selected for the technology integration. François Blais, vice president of technology and specialized equipment for Scéno Plus, said, “We have worked for 35 years to build theatres around the world. As theatre designers, our job is to make sure that everything is coordinated. We want artists to perform in this venue and say to us, ‘This is one of the finest venues we’ve ever played, and we want to return again.’ Visionary enabled us to rapidly and efficiently manage this large-scale installation.”

Sébastien Larose, AV designer for Scéno Plus, adds “We have over 150 televisions in the theatres. The ability to put the content onto the network and run a single CAT5 cable allows us to simplify the system. We have Visionary endpoints almost everywhere because Visionary allows us to take a signal from any location and transmit it to anywhere on the property.”

Solotech was selected for the design-build for Resorts World Las Vegas’s Zouk Nightclub, Ayu Dayclub and the accompanying restaurants and lounges. “We have a mixture of displays throughout the restaurants, cabanas and bungalows in the dayclub and nightclub. We’ve integrated Visionary’s endpoints in all of those areas to enable simplified control for the guest to choose between sources and have content delivered to those endpoints,” explained Aaron Beck, business development manager for Solotech. “The overall capability for Visionary to deliver the technology for these endpoints to be connected on one global network is incredibly impressive.”

Visionary’s efficient endpoints use standard PoE power. This distinguishing feature ties directly into Resorts World Las Vegas’s sustainability initiatives. “Resorts World Las Vegas is focused on corporate social responsibility efforts that allow both the community and the environment to win,” noted Reisig. “We can use fewer products with Visionary’s Duet Wall Plate Encoder because it integrates multiple solutions into one. The solution also utilizes significantly less power than the competition because it runs off standard PoE.”

Snell added, “From a design and engineering perspective, standard PoE makes things very easy, whereas things that require PoE+ or even PoE++ makes it very difficult to work with. It adds an additional layer of cost and maintenance.” By integrating standard PoE power, Resorts World Las Vegas can reduce energy consumption and the correlated environmental impacts along with the added benefit of saving tens of thousands of dollars per year – for the life of the project.

For more information on Visionary, please visit vsicam.com. Keep up with the latest news from Visionary on LinkedIn and YouTube.

About Visionary
Founded in 1995, Visionary (formerly Visionary Solutions, Inc.) manufactures audio and video over internet protocol (AV-over-IP) equipment that provides real-time transport of audio and video over IP networks. With SD, HD and 4K encoders that support the latest technology standards, such as Dante, H.264 and JPEG2000, Visionary’s modular solutions are recognized around the world for their outstanding value, performance, flexibility and quality. With a company-wide focus on customer satisfaction through collaboration and hands-on support, Visionary is a trusted partner for high-quality AV-over-IP solutions for enterprise, education, healthcare, government, professional AV, cable, broadband and broadcast applications.