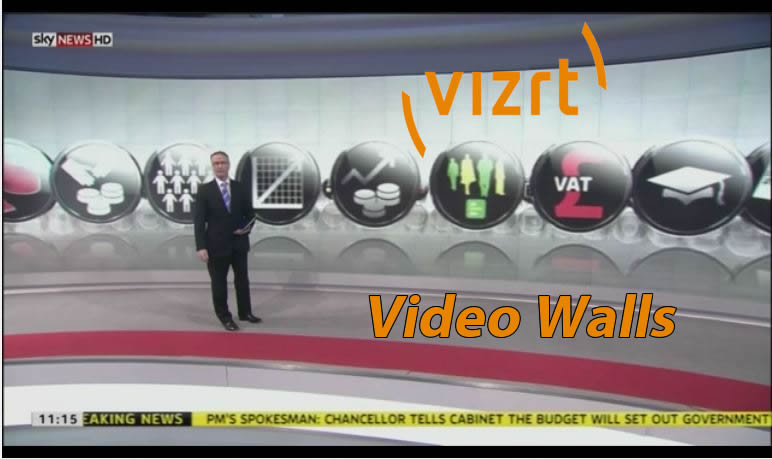 Vizrt and the Video Wall

You cannot look at a Video Wall and NOT be impressed. Sure, they may seem commonplace at the many conventions or shows you’ve seen them in, 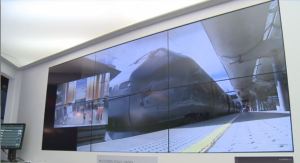 and to actually own/possess one is a marvel in and of itself (usually reserved for the REALLY high-end companies), but if you’re ever assigned the task to create or maintain one, the realities of their complex mystiques will shine through. But you can’t argue the point – they are impressive.

One of the main complaints about that impressive looking video wall has been the difficulty and complexity of keeping it up-to-speed behind the screens; all the synchronization that must take place precisely for the sharpest most impressive image is daunting. The terms Data Wall, Media Wall, and Video Wall have been utilized interchangeably enough that the original distinctions between the three have faded, to a large degree. Proper operation of a video wall requires numerous screens, special software, and special hardware to reach its full potential. 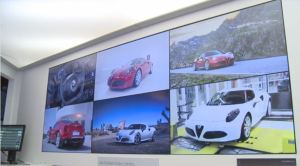 When utilizing a large display of closely-set and/or tiled display screens (including those that overlap somewhat) to create one vast amalgamated viewing wall/screen, the screens are kept as close together to create a continuous image. The complications of the process can increase or decrease based on the intricacies of its intended functions; for example, can a few or all of these screens still have independent operation & display? This is just one of the many questions that must be asked when assembling such a multipartite device.

The viewing surface created doesn’t even necessarily have to be an ‘average’ wall. Curved walls, non-rectangular shapes, 3D shapes, such as cubes or partial or whole spheres, with the screens facing in or out – all of these are possible – it just depends on the end-use and intended effect. Because it’s comprised of multiple separate screens, a Video Wall can ignore some spatial boundaries that might affect a single screen; traditional screen boundaries can thus sometimes be ignored. Keeping the mullions between the screens to the absolute minimum vastly improves the one big screen illusion some video walls want to project.

The individual screens used are front or rear projection devices that can range from very small to very large (say 4-inches on the diagonal, all the way 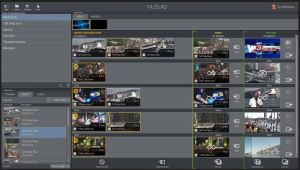 up to a 12-foot diagonal measure). Another possibility for a video wall is the use of LEDs. The Guinness World Record’s Largest High Definition Video Wall is 15 meters high by 60 meters wide. It’s in the Suntec Exhibition and Convention Centre in Singapore. It utilizes over 660 LG LED flat panel displays. It has 84 times the resolution of standard HD. Another ginormus video wall display resides in the headquarters for IAC/InterActiveCorp on the West Side of Manhattan; IAC Video Wall is 120 feet wide and 11 feet tall. This high-resolution feat of engineering utilizes LPD technology (Laser Phosphor Display)

What allows any video wall to function are specialized video processors, tasked specifically for the purpose of coordinating all the complexities that come with presenting this singular unified vision thru multiple unified outlets, each doing its synergistic part to produce its little piece of the big picture at exactly the right time, with the right brightness and resolution. This high-tech piece of hardware & software, considered as one, also has to ensure a unified format, possibly including the utilization of some format conversation software into the already intricate mix of machinery. Multiple sources of input can also potentially be woven together to produce the final image. Some type of remote control device is also an important part of the system.

If what you seek is the ideal control room video wall, Vizrt has what you need; it has the right computing power to help utilize the complex configuration of your video wall to help present your stories. Vizrt has created Viz multi-play – this simple, yet powerful, solution allows you to manipulate video screen content from a single interface. Aspect ratios can now be easily manipulated on any configuration of screens by the broadcasters. Individual screens as well as groups of screens can be separated from the primary image, and the screen configurations are easily changed to presets or and customizable.

An apt storyteller ideally has a playlist for their elected subject matter; screen configurations can aid in this process, and with the Viz multi-play, a playlist of content is easily constructed in the control room or the newsroom, allowing content to be directed to any output. The program can be

operated from tablet or touch screen. Altering the screens is easy and simple – its accomplished with a one-touch control. The current presenter can easily take the helm and activate content on each and every screen so desired at whatever speed that suits that endeavor. Content can also be sent to multiple screens at once.

The Viz MultiPlay utilizes the Viz engine to render graphics and video in real-time, readying them for use with the video wall or the screen of your choice. Adjusting resolution is simple with this multi-screen control. The easy to use interactive interface allows such things as control and playout of clips, live video, and images to any display or video wall with a single touch. The Vizrt core in the Viz Multiplay requires no infrastructure, so it’s ideal for “plug-and-play;” just select content from a video source and drop it into the viz multiplay folder – now, you can display that asset at any connected screen or the video wall. 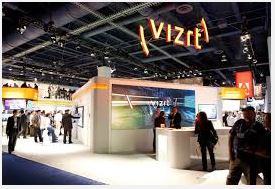 With realtime 3D graphics, this control room solution helps polish your content as well as present it. Even if you’re not currently a Vizrt customer, the Viz Artist option is readily available and can help you create astonishing 3D graphics. There are 2 varieties of viz multiplay: the DVI single box system or the SDI dual-channel system.

Graphics sell the show, and Vizrt has so much ground-breaking technology and definitely sells the shows! In addition to its own products, Vizrt teamed-up with Adobe a while back to give the Adobe Premiere Pro CS6 more versatility. Source material can be dragged onto the timeline and media is directly available… without a file-transfer! Still, nice. Social TV solution helps create interactive TV? Wow – also nice. And then there’s the new Viz Engine with 4K resolution rendering and IP media streaming. Using multiple Viz Engines allows the rendering of the same content all in real-time and an output to different formats for multiple platforms that eliminates the need for transcoding to each of the platforms! Vizrt manufactures amazing solutions. I’ve said it before, and I’ll say it AGAIN: you should Vizrt their website: www.vizrt.com 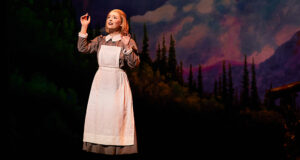 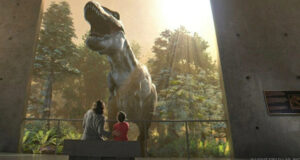 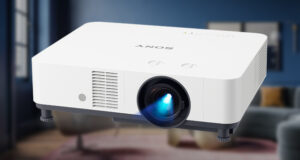 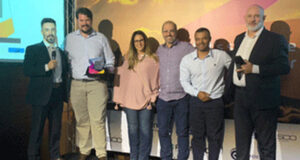 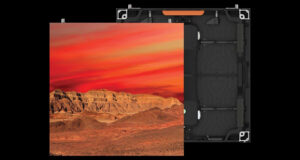 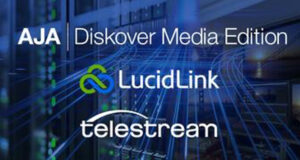