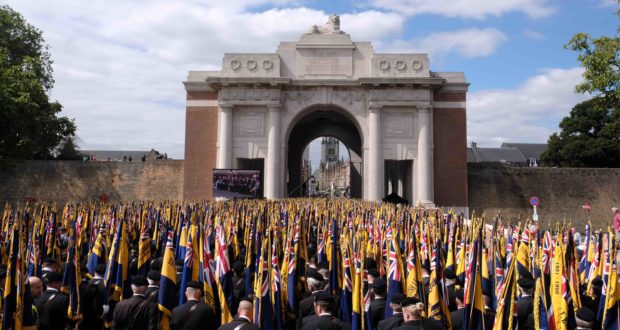 Pilgrimage of Remembrance recreating the Great Pilgrimage of 1928. More than 2,000 members of the Royal British Legion, representing communities from across the UK and around the world, marched through Ypres in Belgium, to the Menin Gate, carrying 1,100 standards, for a service of commemoration under the gate marking the start of The Hundred Days Offensive. This Offensive led to the end of the First World War.

Globecast, the global solutions provider for media, in partnership with event management company HPower, provided complete production and associated technical services to the Royal British Legion (RBL) for its recent Great Pilgrimage 90 Parade and One Hundred Days Ceremony. This included pre-event filming, two production facilities including the crew and Director, live coverage for news channels via satellite, the crew and coordination for various regional TV live down-the-line interviews as well as social media clips during the event.

Exactly 90 years after it first took place, thousands of Legion representatives recreated the 1928 Battlefields Pilgrimage and visited the same battlefields and then, on 8th August 2018, paraded their branch standard and a wreath along the same route to the Menin Gate. This was for the One Hundred Days ceremony to commemorate the last 100 days of WW1 and represent an entire generation that served while defending their country. 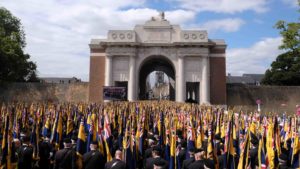 Globecast, who partnered with HPower, marking the second time the two have worked together, supplied complete production solutions to create end-to-end coverage. They provided camera crews along with drone facilities for pre-event filming. Footage of WW1 memorial sites was captured for later use in post-production edits. There were two production facilities with full crew supplied, the first with three RF cameras, including a jib, to cover the Parade with over 2,000 Standard bearers and wreath carriers taking part. This also provided coverage of the post-ceremony remembrance celebrations.

The second facility was at the Menin Gate itself with four cameras, again including a jib, to cover the formal ceremony and wreath laying. The two trucks were linked so that adjacent big screens could carry the entire event from start to finish. The Director worked to a brief supplied by RBL.

Central to the project was Globecast’s ability to provide ultra-fast turnaround social media clipping capabilities via its Live Spotter technology. This allowed the RBL social media team to post to multiple social media channels as the event was happening.

Jo Peck, Marketing Director, HPower, said, “We were very honoured when the Royal British Legion contracted us for this project, given the nature and scale of the event. We immediately turned to Globecast as out partner, knowing their experience and competence with major live events and their ability to provide end-to-end coverage services. We needed to deliver multiple services, with the ability to easily create and supply ultra-fast turnaround social media clippings front and centre of this project. It was a pleasure to work with them again and to see such brilliant results.”

Liz McParland, Commercial Director for Contribution and Global Coordination with Globecast, said, “This was a complex project that required a high level of technical contribution expertise alongside production skills as well as a sensitive approach to the subject. With so much happening, it wasn’t just the technical aspect that required careful consideration, but the overall logistical approach to the project. We are very happy to have been offered the chance to partner with HPower to cover this.”

Jump is a B2B communications agency that provides bespoke PR, marketing and creative services to technology companies across the professional video industries, from content acquisition through delivery to the home.

Latest posts by Jump (see all)