Zulu
THE BEAT:
Home » News » 5G Streaming is Going to be Beautiful When it Gets Here But… 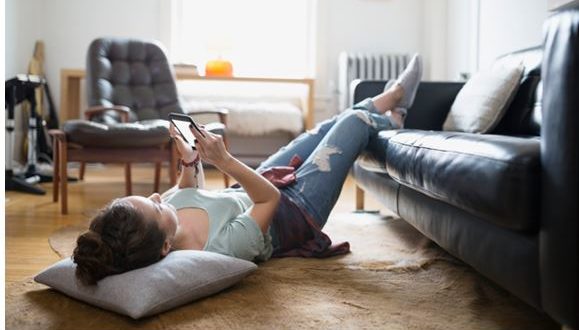 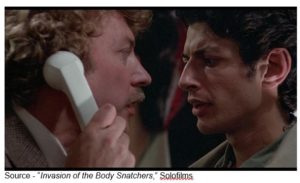 “That’s because they’re all part of it. They’re all pods, all of them!” – Nancy Bellicec, “Invasion of the Body Snatchers,” Solofilms, 1978

For about 25 years, we sailed the San Francisco Bay; and as often as possible, under the Golden Gate Bridge into the Pacific.

As we passed the mile buoy, we’d see a great friend on his boat rubbing his hands together with a huge grin on his face … a new adventure/opportunity was beginning.

That just about sums up the expression of nearly everyone at this year’s IBC.

The meaning of people watching TV/seeing a movie has changed dramatically over the past few years. So have the content production, distribution, consumption models.

Filmmakers, broadcasters, studios, content distributors and infrastructure/service providers are rubbing their hands together, confident that there’s going to be an ocean of opportunity to satisfy folks with all the content they want anywhere, anytime, on any device.

IBC’s Michael Crimp and his crew did a great job of keeping everything on an even keel despite the turbulence of big mergers in every segment and the unbridled enthusiasm of the telco folks that “their” 5G was going to be the way folks get their entertainment.

After all, “everyone” had a smartphone, it’s with them 24×7 and they use it for … everything. 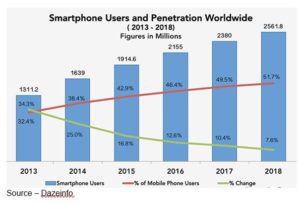 Smart Growth – Despite the higher cost, most consumers prefer to use a smartphone rather than feature devices since the ability to make a call isn’t very high on their priority list.  IDC projects sales will increase over the next few years and telcos are already planning for the expansion of their data services.

It doesn’t bother them that there are over 3.6B active Internet users around the globe and people are getting used to their OTT (over the top) viewing options.

And they’re inclined to use them … all of them! 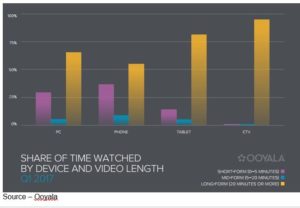 OTT Opportunities – While telcos are boringly optimistic that everyone will be watching their content on their mobile device, Ooyala and other monitoring services find that people still consume the majority of their content on the larger screen and after that, whichever screen is close at hand/convenient.

The smartphone might be ever-present and convenient, but a lotta’ folks think bigger viewing is better.

Still, the providers are confident their usage and revenues will soar.

Behind the curve, about 92 percent of 18-29 year-old North Americans own smartphones and a rising number of older adults (presently 75 percent) have smartphones.

According to Ooyala, there are a lot of indications that mobile video will continue to grow rapidly because more than 51 percent of video starts on smartphones. IDC recently announced that smartphone sales growth will return with overall shipments reaching 1.6 billion devices in 2022–most with larger screens.

While there was a lot of disagreement on how people were consuming their content at IBC, everyone agreed that TV has evolved from a world of limited options to virtually limitless choices. 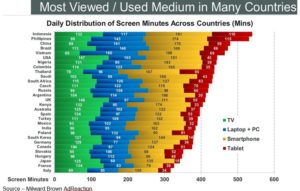 Around the Globe – In many countries, people don’t have a lot of discretionary income, so they invest in the devices that will serve the majority of their needs.  The choice is often a smartphone followed by a TV at home, so viewing times favor TV sets and smartphones.

Now it’s up to media and delivery companies to figure out how to make a buck.

Of course, they all like to get an inside look at how the big kid on the block is doing it.

Netflix, which  has more than 130M subscribers in 190 countries, shows there is a difference on how people sign up and how they view their content. 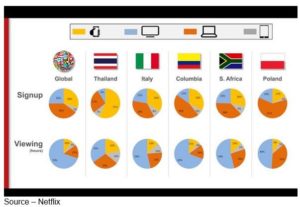 Sit Back, Enjoy – Netflix has found that subscribers may sign up for the viewing service on one of their screens, but actual content consumption might be different.  For example, in Thailand, most folks signed up for mobile viewing, yet the majority of screen time is spent with a TV.

The global subscribers consume a large chunk of the cable, broadband and wireless bandwidth requiring 4 Mbps for HD streams and 8-12 Mbps for UHD (4K) streams.

Sounds simple enough for content distributors and delivery folks to figure out, but they often overlook that Netflix has spent a lot of years and money to refine how they compress data for streaming and how they decompress it for viewing – on any device.

In addition, they invested in the development of  a globally distributed CDN (content distribution network) to minimize the distance a viewer’s content choice must travel – faster, more responsive refresh; consistent quality. 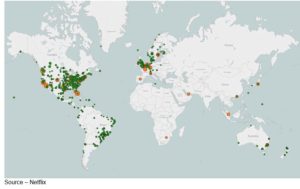 Investing in Service – To expand their viewers around the globe, Netflix not only aggressively invests in high-quality content but also in an infrastructure that ensures quality content is consistently delivered.  The company has developed a strong network of servers around the globe to keep folks entertained.  Quality of delivery and service is something studios, channels, distributors and cable/telcos often overlook.

The network also “knows” the most effective and efficient data stream the user’s device can handle and will fine tune the stream for optimum enjoyment in real-time.

But IBC’s Crimp is right about being so bullish about 5G because it will deliver content 20X faster than with 4G; and that will be vital, not just for content streaming (not that our kids care) but for the rollout of IoT (Internet of Things), which will have more than 20.4B “things” connected and communicating by 2020.

And for the M&E industry it’s really important.

Throughout IBC’s 15 halls, the discussion was (nearly) all about what a game changer and disruptor 5G technology will be.

Yes, it’s true that the technology is proven, and the specifications are being ratified and that standardization issues are being addressed.

Crimp was certain that the content industry will provide an early use case for 5G. 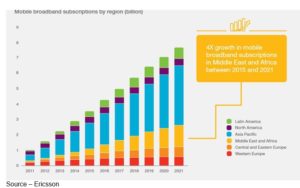 Growing Service – Mobile broadband is growing rapidly around the globe because fixed infrastructure is costly to install and maintain.  However, mobile wireless is less expensive and can be quickly deployed.

It should, because mobile broadband subscription is growing in leaps and bounds and Ericsson predicts that by 2021 more than 60 percent of the mobile traffic will be video.

It’s sort of a no-brainer for global telcos.

For all of the smoke and mirrors, speeches and presentations and tidal wave of news releases, the whispered fact is the hardware isn’t ready … yet.

Companies are building prototype devices with prototype chips and antennas to test on prototype networks (remember, standards issues are being “addressed”).

Testing for fixed and mobile 5G products has been going on for a long time now. All equipment manufacturers and carriers have to do is get all the stuff working together.

Of course, that won’t stop folks cheering how great things are gonna’ be at MWC (Mobile World Congress) in Barcelona in February. 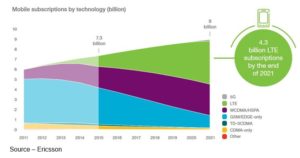 Squint for 5G – While telcos and product/service providers have been telling consumers how great 5G service will be shortly and touting the fast, responsive video they will be able to enjoy, it will take time to have service everywhere.  In the meantime, 4GLTE will be delivering shows to your device and for some time to come.

While AT&T, Verizon and T-Mobile/Sprint will begin 5G service roll-outs in select cities in the U.S. and will expand to China and most of the industrialized countries; it will take a while to become a major communications factor in emerging countries and the world.

Still, people aren’t sitting around twiddling their thumbs waiting for the telcos to install all of the small cells in their neighborhood, so they can enjoy their content.

According to Zenith, people around the globe will watch 25 percent more mobile video than last year.  However, 60 percent of video viewing takes place at home via a fixed line broadband connection.

According to speedtest.net, the global fixed broadband download was 46.41 Mbps and wireless was 22.81 Mbps.

Yeah, we know, those are averages and your speed may vary … significantly.

Take the U.S., for example.

Both are still good enough to download a viewer’s Netflix 4K movie in a few minutes as long as everyone in the household isn’t doing the same thing at the same time. 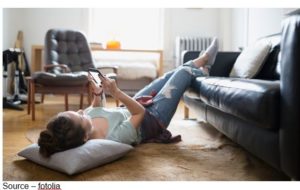 Younger Generation – Gen Zers have never known a world without digital connections and tend to use their smartphone for everything including video streams–even when a larger screen is available to them in the next room.

Thanks to younger folks like our daughter, Cisco projects that 76 percent of the mobile traffic next year will be video and that has telcos thinking about taking advantage of her “habit.”

One thing mobile operators have avoided addressing is how much they’re going to charge for the new ultrafast 5G service.

Because we now live in a post-Net Neutrality world, operators have gotten really creative on the packages they offer.

Take the unlimited data plans which to some folks means, “Hey, I can stream all the Netflix and YouTube (plus Hulu, HBO, etc.) I want and my entertainment life will be sweet.”

That’s why they have a great group of lawyer-written unlimited wireless data plans.

Sometimes their legal creativity can become a huge PR debacle.

A few weeks ago, Verizon slowed – throttled – the wireless data connection to firefighters battling the blazes in Northern California to the point communications was impossible.

Yep, it’s amazing how quickly you can burn through your data plan when your team is online 24 hours a day for 5, 10, 20 days straight.

That’s a helluva’ error when all of us – especially important folks like first responders – depend on smartphones and wireless service.

Your household video gobbles wireless data faster than you can imagine.

Just think how happy you’re going to be when 5G finally becomes available in your area and you sign up for the super-fast 5G viewing packages and blow through your data plan capacity in a few days?

According to analysts at Recon Analytics, the average consumer uses 7GB of data a month.  People who watch Netflix movies and YouTube videos use a lot more – 40 hrs. of SD video is about 35GB, HD is 114GB and 4K/UHD is 450GB plus a month.

Imagine your shock when you hit your new ultra-high speed 5G data cap and they throttle your speed down to 3G (slow) or 2G (good for teletype).

Your wireless carrier might send you a note telling you you’re running low on your wireless data plan, but they don’t bother telling you at the get-go how to avoid using it.

No, that’s not really in their best interest.

With all the great content being made available, it’s easy to agree with Ericsson that three quarters of mobile traffic in 2023 will be video and mobile data traffic will increase to 110EB or the equivalent of 5.5M years of streaming HD video.

In addition, folks will have to become more creative in how they view their content. 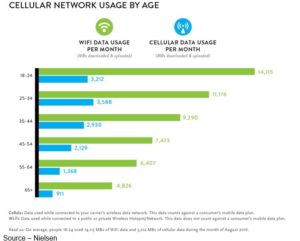 Smart Usage – Right after your first “unlimited data” plan bill, you’ll see why our kids use Wi-Fi streaming whenever possible rather than their cellular plan.  It ain’t cheap!

When we go overseas, we shut off our phone data service and rely on Wi-Fi because mobile data outside your normal coverage area – in our case the U.S. – isn’t just expensive … it’s expensive!

Our family learned – the expensive way – to stay off the wireless network, especially during viewing hours, so we’re able to stay well below our monthly data caps.

With the wireless networking industry moving from 802.11ac to 802.11ax, we should all see better delivery of high-capacity content as well as less congestion when you’re in crowded smartphone using areas.

Of course, don’t count on your telco sales rep to tell you this because you might just end up buying a smaller data bundle. 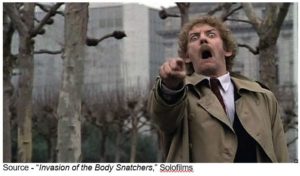 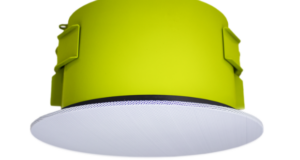